One of CAP’s great strengths is its flexible, adaptable model, which can be tailored to fit the needs of any community. The examples here show the varied approaches CAPS take to tackling alcohol harm to young people – and the impact they are having in their communities.

There is an emerging body of evidence – both from the five independent evaluations commissioned by CAP and the self-evaluation reports that all schemes are required to produce – that CAP helps to reduce alcohol-related crime and disorder and the acquisition of alcohol by under-18s. In recent years we have also seen significant reductions in weekly drinking among Years 9-11 in CAP schools.

Typical improvements in the key measures: 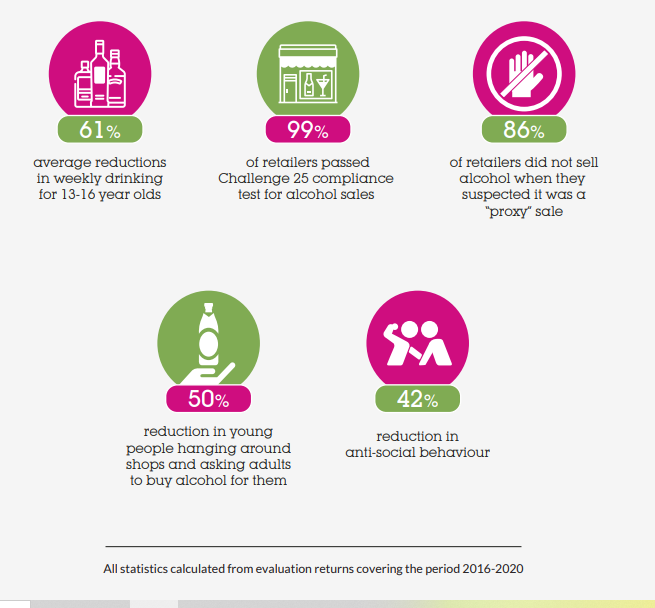 Thanet is an area in East Kent that includes the coastal towns of Margate, Ramsgate and Broadstairs and surrounding village areas. Deprivation, crime and unemployment are all statistically higher than the England average, with higher proportions of vulnerable populations (Kent Public Health Observatory Data, 2016). Young people who live in deprived areas are more likely to drink alcohol, drink at an earlier age and drink to excess (Kent Drug and Alcohol Strategy 2017-2022). In 2012-13 and 2014-15 Thanet had the second highest number of under 18s admitted to hospital for alcohol specific conditions across the county. This figure was 51.8 per 100,000 of the population.

The evaluation of the Broadstairs and Ramsgate CAPs sets out the objectives they established, the action plans they developed to address them, and the impressive impacts those measures have had.

Hastings was once described as a ‘drinking town with a fishing problem’. East Sussex County Council’s Public Health data shows that alcohol consumption and the health harms of alcohol to residents are significantly greater than in almost all other communities in southern England.
Since its launch in 2012 our Hastings CAP has worked hard to reinforce Challenge 25 compliance and to engage with young people, working very closely with Hastings Academy.  This increased profile of alcohol harms within the school has led to underage drinking levels there dropping considerably (36%-25% less) over the last three years and we are delighted to see that parental supply of alcohol to young people has also reduced significantly by 49%, to just 11% in 2019.  You can see the full evaluation here.

Castleford CAP - a focus on education

CAP’s emphasis on education can help ensure that young people are equipped to make the right decisions about a range of issues, including drugs, anti-social and criminal behaviour. It is a long term, preventative approach and an important local initiative as part of wider approaches to tackle knife crime, gang culture and county lines.

The Castleford CAP was launched in May 2014, focusing on underage drinking and associated anti-social behaviour in the Airedale, Ferry Fryston and Townville part of the district. Following its success, the CAP was expanded in 2015 to cover the whole of Castleford.

Although there was a great deal of enthusiasm to make improvements, partners were frustrated that joined up thinking and multi-agency activity didn’t seem to be happening effectively. They decided that CAP offered a robust model that they could work with.

This resulted in a particularly effective partnership with the local Airedale Academy. Sixth form students devised a powerful and moving play which has now been shown to hundreds of students with accompanying workshops. The Wakefield District Domestic Abuse and Safeguarding Team was so impressed that it requested performances at training workshops for head teachers and other professionals, and it has now been adopted by the Academy as part of sixth form Theatre in Education learning time. Funding from West Yorkshire Police and Crime Commissioner’s Safer Communities Fund saw the students work with a local production company to turn the play into a filmed resource to use in educational settings and on social media, where it has been viewed more than 2000 times. Students have now made another film, Angel of Knives, which focusses on knife crime. See the full evaluation here.

Partners in the Alnwick CAP in Northumberland were keen to ensure that young people across the area were able to achieve their potential in education and health. They were aware that underage drinking and anti-social behaviour were occurring in the area and wished to be pro-active in addressing it. They felt that CAP offered a robust model that they could work with.

In its evaluation, the CAP reports some key impacts, including:

Tower Hamlets reports on the success of its Lansbury CAP

The Lansbury CAP in Tower Hamlets has seen great success in its education and enforcement strands and its interactive workshops on alcohol, sexual exploitation and grooming reached over 400 pupils at five schools.

The CAP has now evaluated its work, highlighting a partnership with Tesco to offer free responsible retailer training for all off-licenses across the borough, a successful collaboration with a local youth centre and work to identify and make Designated Premises Holders at off-licences more accountable. You can see the evaluation here.

Underage drinking continues to be a problem in Barrow but the CAP is working hard to resolve local issues. Its evaluation shows that it is taking a strong partnership approach and fully engaging local stakeholders, bringing together the various strands of education, enforcement, public perception, communication and diversionary activities for young people - read the full evaluation here.

The Bulk Ward estate in Lancaster is one of the most deprived areas in the North West of England, where underage drinking has been a long-standing issue. Lancaster CAP has worked closely with the community to change attitudes and behaviour, resulting in real improvements to the well-being of young people and residents. Working from its base at the Ridge Community Centre, there is very clear evidence that the CAP is having an extremely positive impact: reducing underage drinking, improving the health and well-being of residents and creating a real sense of community in the area. See its evaluation here.

An 80% reduction in anti-social behaviour in Longtown

Longtown CAP has brought about a hugely impressive 80% reduction in anti-social behaviour locally. Its success has come from focussing on both the supply and the demand side of underage drinking – working with closely with retailers to raise standards and engaging with young people, getting them involved with the campaign and building their trust. The CAP held five engagement nights with young people to give their views and then set about fundraising to renovate a room at the community centre that they could use, and for a paid worker to run sessions with them. See the evaluation here.

Before the launch of Todmorden CAP in 2016 there was an increase in reports of minor crime, anti-social behaviour and youth related nuisance. One of the primary focuses of the CAP has been working with young people in the area, targeting underage and proxy purchasing and highlighting the dangers of alcohol. By working closely together, the partnership has had a significant impact on the community and brought about further positive schemes such as the hugely successful pub watch – something that all licensees proactively take part in to keep their customers safe.

Working with young people in Reading

In 2016, Reading CAP was independently evaluated through Arcola Research, which highlighted its particular success in raising awareness of alcohol harm; education; reducing alcohol sales to young people and providing training for retailers to ensure compliance with legal requirements. A summary of the evaluation can be read here.