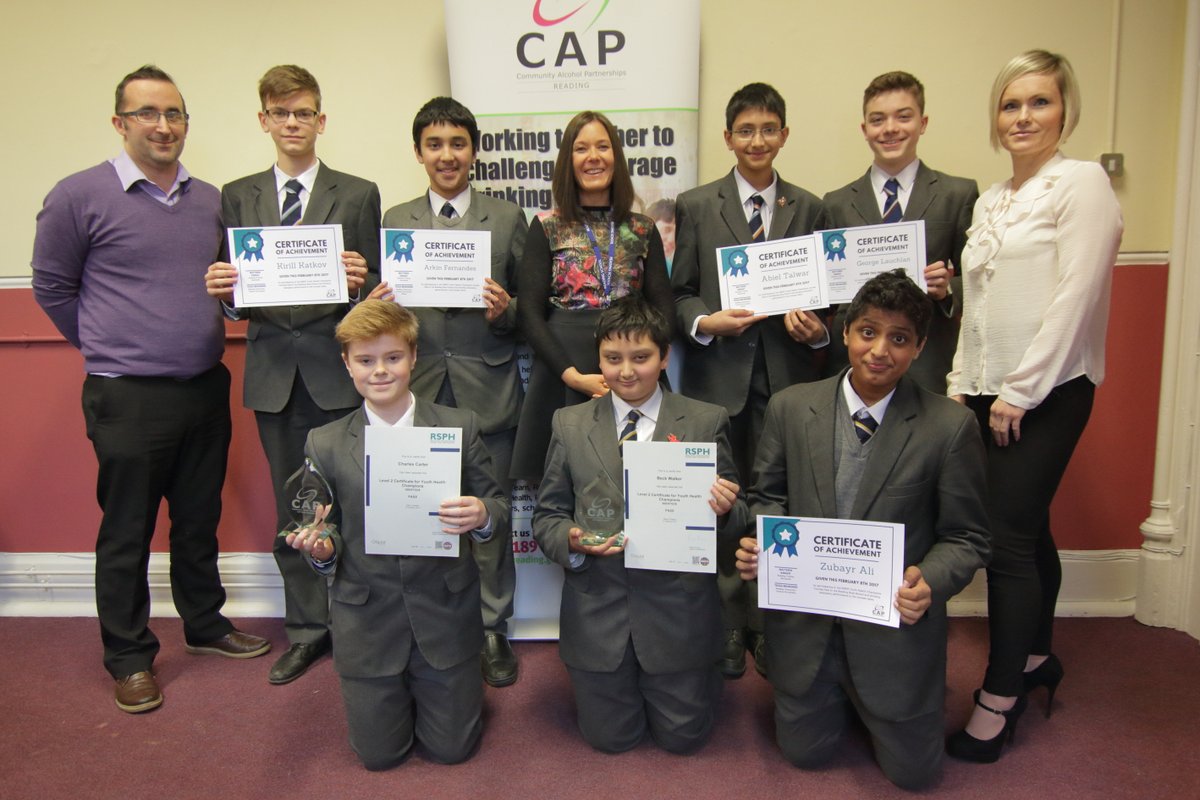 Both boys are pupils at The Reading Boys School, where CAP and Berkshire Community Foundation have funded the Youth Health Champion scheme, which is run by Reading Council Officers.

The course is designed to give young people the skills, knowledge and confidence to act as peer mentors, increasing awareness of healthy lifestyles and encouraging involvement in activities to promote good health.

They received their awards along with six other pupils who received Certificates of Achievement for taking part in the course.

Reading CAP was set up in January 2015 as a partnership between Reading Borough Council, local police, retailers, schools, neighbourhood groups and health providers. It aims to reduce the sale of alcohol to young people, advise them on the dangers of drinking and provide alcohol-free activities through youth services and local charities.

Beck Walker said: "It's nice to know we are taking an active part in our role in the community. I feel honoured to have the chance to educate and help Reading grow into a better place."

Miss Jo Capon, Reading School's Assistant Head Teacher, said: "It has been wonderful to be involved in a scheme such as this. Peer education is a powerful tool and I look forward to seeing how Beck and the team develop the strategy in the months ahead."

Cllr Graeme Hoskin, Reading Borough Council's Lead Member for Health, said: "Congratulations to all the boys who have taken part in this course. Evidence suggests young people are more likely to seek advice from their peers, making Youth Health Champions a more effective way of getting health messages across."

Drinking alcohol underage can result in short and long term issues impacting on health, education and young people's future prospects. It also increases the risk of becoming involved in anti-social behaviour and crime which also affects the wider community.

An external evaluation of its work found that the CAP Retailer Training Programme has increased local retailer awareness of the law on sales of alcohol and increased retailers' capacity to challenge young people without acceptable ID. There were significant declines in the rate of test purchase failures and in the number of retail outlets where illicit alcohol was seized. In addition, fewer retailers reported issues with attempted underage and proxy purchasing (purchase of alcohol by adults for consumption by young people).

Photos of the Youth Champions are available on request.