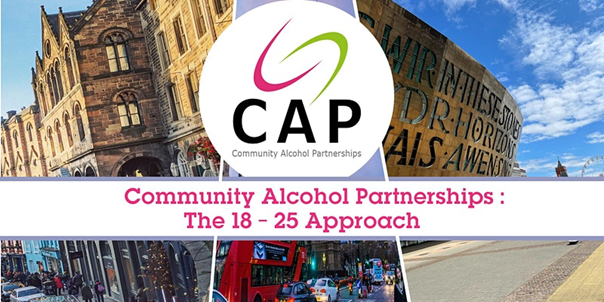 On March 23 we held our most popular webinar so far, discussing CAP’s partnership approach to reducing alcohol harm among young adults. It bought together some brilliant speakers who addressed a wide range of issues, from drink spiking to the Women’s Night Safety Charter.

Our keynote speaker was Tracy Lumb from SOS-UK who described its two main programmes: Alcohol Impact - a strategic framework and supported accreditation mark designed to bring students’ unions and institutions together in partnership to create the conditions for a social norm of responsible alcohol consumption by students. And Drink-Rethink, a student-led Alcohol Brief Intervention programme.

Talking about the Alcohol Impact scheme, which has been run over 30 times, Tracy said: “This isn’t about being the ‘fun police’. It’s about reducing harm to students, improving student welfare, health, academic success and the student experience.”

She outlined some of the great initiatives that universities have come up with as part of the scheme such as alcohol-free spaces that run into the evening, tackling pre-drinking and offering non-alcoholic alternatives. They’ve had some impressive impacts, including a 40% decrease in students’ exclusion from campus venues due to irresponsible drinking and a 20% reduction in the number of students pre-drinking regularly in halls of residence.

Tracy’s speech was followed by a presentation from Ian Tumelty and Lauren Idowu who head up our Cardiff CAP which is aimed at protecting young adults from alcohol harm. Lauren said: “Cardiff CAP is working towards developing a culture of young adults drinking responsibly and safely, reducing the burden on public services and improving wellbeing.”

She and Ian outlined some of the CAP’s innovations, including developing an alcohol-free venue map for the city highlighting premises that are alcohol free or which offer a good selection of non-alcoholic drinks.

CAP adviser Matthew Knight gave an insight into why communities might want to set up a CAP with a focus on supporting young adults and how to go about it. He stressed the importance of choosing the right person to co-ordinate the CAP to establish an effective lead, and of identifying current workstreams so CAP can fit into existing partnerships without duplicating work or creating separate meetings.

One of CAP’s great strengths is the breadth of our partnerships and the range of organisations we work with, which bring huge added value to CAP projects.

Helena Conibear spoke powerfully about the Alcohol Education Trust’s drink spiking report which found that one in 10 young adults had experienced drink spiking yet 92% of survey participants who had been a victim of drink spiking didn’t report it and 50% of those who had reported it found nothing happened as a result.

Rita King, joint CEO of the Safer Business Partnership, spoke about two of its workstreams – a scoping review of the Women’s Night Safety Charter in London and a re-launch of the Ask for Angela scheme.

The Women’s Night Safety Charter is an established pan-London initiative, originally launched in 2018 by the London Night Czar, Amy Lamé. The Charter is part of the Mayor’s Tackling Violence Against Women and Girls Strategy and London’s commitment to the UN Women Safe Cities and Safe Public Spaces global initiative. The full scoping review can be found here.

Ask for Angela is a customer facing campaign helping to prevent and reduce sexual violence and vulnerability whereby customers in a venue can use a code word to inform staff that they feel unsafe or threatened.

The key principles of the campaign are:

Last but by no means least, we heard from Sylvia Oates who heads up Best Bar None. This is an accreditation scheme supported by the Home Office and drinks industry that aims to improve standards in the evening and night-time economy. Through a combination of responsible management and operation of licensed premises, ongoing improvements and social responsibility, Best Bar None’s goal is to help provide a safer night out for  all.

Sylvia’s presentation demonstrated that where there are already areas of partnership in place, these can be used to great effect by working together rather than re-inventing the wheel.

If you missed the webinar, you can access the recording here by using the password CAP2022. And if you are concerned about young people’s drinking in your community and would like to know more about setting up a CAP to tackle it, please get in touch with your local CAP Adviser for more information. You can find their contact details here.