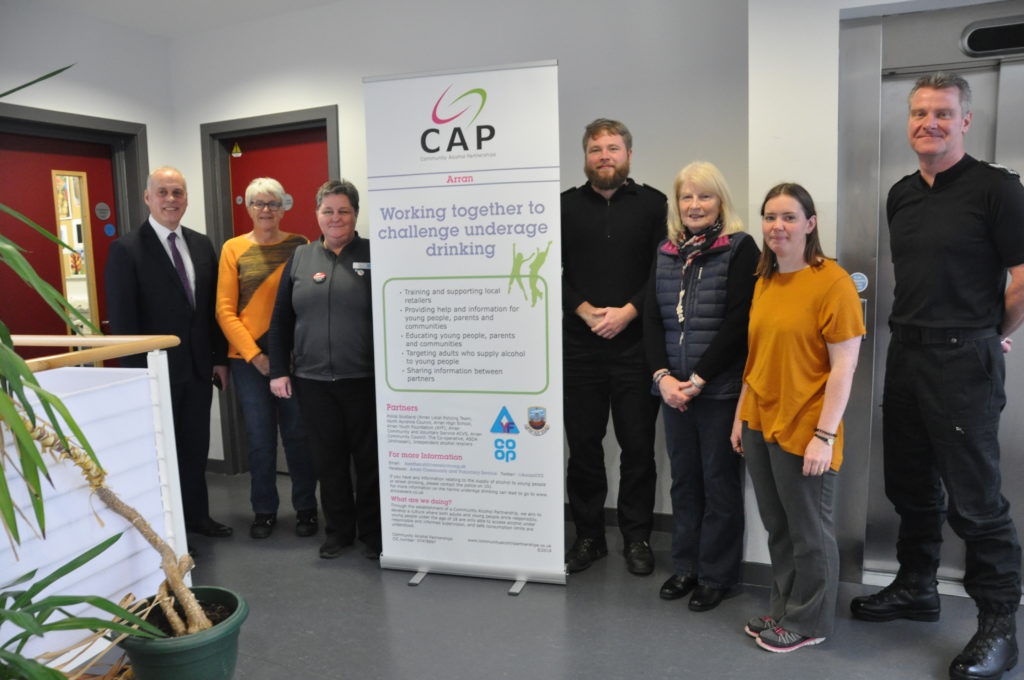 A wide-ranging initiative aimed a tackling underage drinking on Arran has been launched with the creation of the Arran Community Alcohol Partnership (CAP) which is seen as a positive way to collectively tackle the problem which, a recent survey confirms, is not uncommon on the island.­

This showed that while local retailers operate a strict Challenge 25 policy so buying alcohol can be problematic for would-be underage drinkers, many are thought to take alcohol from their homes, sometimes with their parents’ consent, and use secluded locations to drink.a

rents’ consent, and use secluded locations to drink.

parents’ consent, and use secluded locations to drink.

New posters and billboards have been produced, some with warnings stating that it is illegal to buy alcohol on behalf of someone who is under 18 with a penalty of up to £5,000 or a possible prison sentence. Others highlight the dangers to youngsters by drinking. The CAP is intended to complement the existing work of retailers and enforcement agencies, without increasing resources in the long term.

Sergeant  Dougie Robertson said:"­Through the establishment  of the Arran Community Alcohol Partnership, we hope to encourage  a culture where both adults and young people drink responsibly, young people under the age of 18 years are only able to access alcohol under responsible and informed supervision and safe consumption limits are known by all. We also want to look at the   ways   in   which   alcohol falls into the hands of young people and deal appropriately with the issues around the unlawful or esponsible supply of alcohol   to   them.”

As well as helping to reduce instances of underage drinking, the CAP will provide education and diversionary measures, working with key partners and people in the community.

CAP adviser Alan Simpson added: “Alcohol can be seriously damaging to the health and   development   of young people and can impact negatively     on     the     wider community. For our part, CAP offers a great opportunity to make a real and lasting difference to the nation’s relationship with alcohol, starting with the current generation of young people. ­The Arran CAP   is an excellent example of how, when partners come together for a common purpose, it can produce innovative, creative and engaging ways of tactfully encouraging young people to reassess their alcohol consumption and follow a healthy lifestyle.”