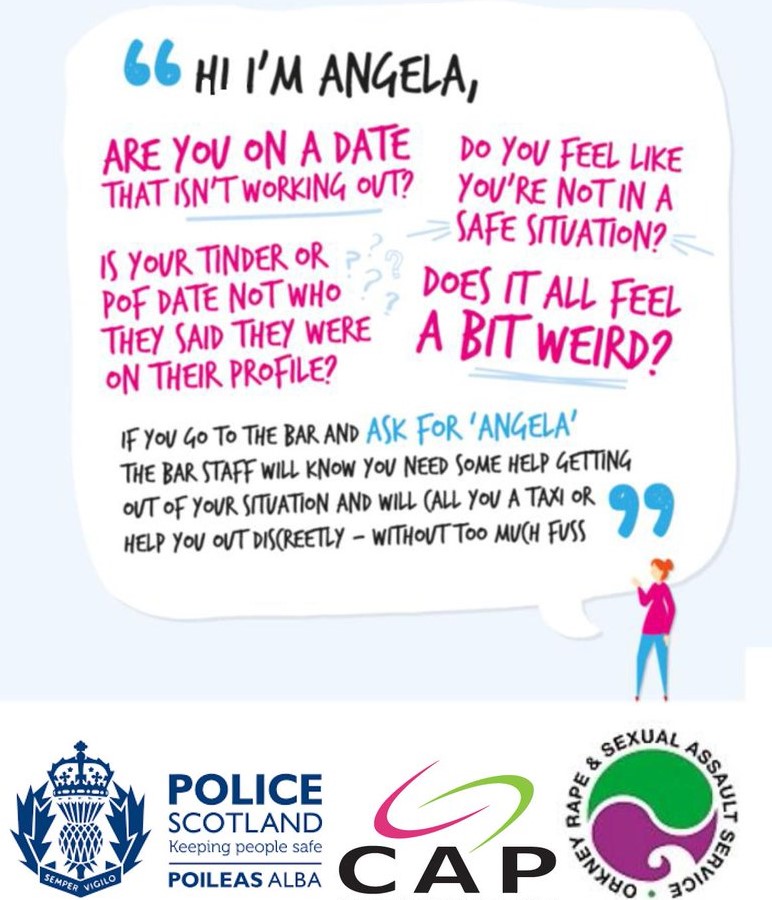 The ‘Ask for Angela’ public safety campaign — where any customer in a pub, bar, restaurant or public venue can discreetly ask a member of staff for assistance should they feel uncomfortable — has been launched in Orkney by Orkney Rape and Sexual Assault Service (ORSAS) in partnership with the Orkney Community Alcohol Partnership (CAP), Orkney Street Pastors and Police Scotland.

‘Ask For Angela’ is aimed at everyone regardless of their age, gender or sexuality and will be advertised with posters. Anyone who feels unwell, suspects their drink has been spiked, receives unwanted attention or is being pestered can approach a member of staff and ask if Angela is working. This will be the signal to staff that something is wrong and the customer requires some assistance.

Staff are not expected to challenge the unwanted behaviour but simply escort the person to an area out of sight of the public and maybe call them a taxi, call a family member/friend or offer them a way to leave the premises discreetly via a back door.

An ORSAS spokesperson said: “We wish to promote Orkney’s reputation for being a wonderful place to live, work and play, so that everyone has a positive experience especially on a night out. With ‘Ask for Angela’, we hope everyone feels that they can seek assistance should they ever need it, and establishments that use the campaign will gain a reputation for being safe places to frequent with a zero tolerance attitude to harassment.”

The Orkney CAP was launched in November 2017, with ORSAS as one of the initial core members. The partnership is co-ordinated by the Orkney Alcohol Counselling and Advisory Service (OACAS). Bob MacKenzie of OACAS says: “The partnership carried out a survey in 2018 about how safe people felt when out socialising in Orkney. Despite Orkney being largely safe, there were some concerns raised and the national 'Ask for Angela' scheme was identified as a possible solution to issues brought to CAP's attention.  On behalf of Orkney CAP, OACAS is delighted to support, and be actively involved with ‘Ask for Angela’."

CAP adviser Alan Simpson says: “I am proud to be associated with this great initiative which is part of the Orkney CAP Action Plan to tackle alcohol misuse and improve the lives of young people and the local community.”