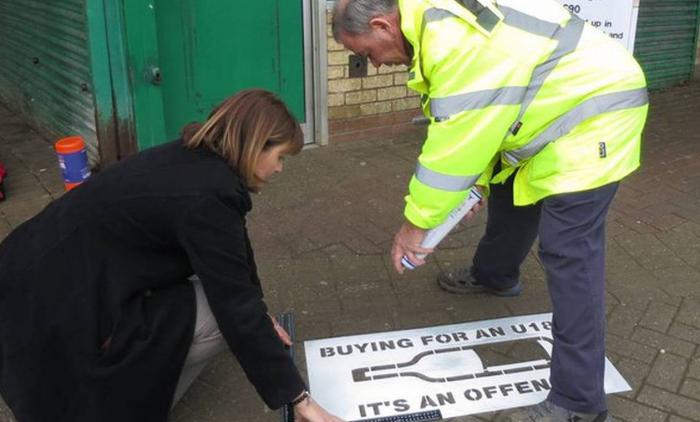 Pavement ‘street art’ will be used in the battle against underage drinking in Burnley in the run-up to Christmas.

Eye-catching pavement stencils will be put in place by the borough’s Community Alcohol Partnership (CAP) as part of a festive crackdown on adults attempting to buy alcohol for young people (known as a proxy purchase).

Local shops are joining in the campaign. The stencils will be displayed outside their premises and leaflets will be made available to customers to explain that buying alcohol for under-18s is an offence and shops have the right to refuse sales.

Councillor Lian Pate, who chairs the local partnership that brings organisations together to tackle crime and anti-social behaviour, said: “We all know that alcohol poses a serious threat to children, not just to their health but also to their personal safety.

“Adults who buy alcohol for children should think twice about what they’re doing and simply refuse to do it. They’re not doing anyone any favours, especially the children who are asking them.”

CAP’s national director Kate Winstanley said: “The Chief Medical Officer guidance is that an alcohol free childhood is best. Drinking alcohol at a young age brings serious risks to children’s health and development and puts them in danger of both physical and social harm. They are far more likely to injure themselves or someone else, engage in unsafe sex, fail to reach their potential at school and engage in anti-social behaviour.

“While we have made great progress in reducing direct sales to under 18s via use of the Challenge 25 scheme, it’s unfortunately still common for under 18s to obtain alcohol by asking adults to buy it on their behalf (proxy purchase).

“At CAP we work hard to raise awareness of this issue and protect children from alcohol harm.  We’ve found that pavement stencils like this are a great way of highlighting the issue - they warn adults not to buy alcohol for children and support staff by showing that proxy purchasing will not be tolerated. The paint spray is chalk-based and temporary and we always gain permission from the shops involved and from the local council to use them.”

CAPs are made up of partnerships between local authorities, police, schools, retailers, neighbourhood groups and health providers and aim to reduce the sale of alcohol to young people, advise them on the dangers of drinking and provide alcohol-free activities through local youth services and charities.