A message aimed at tackling underage drinking will be stencilled in public places around Wantage and Grove by a student of King Alfred’s Academy next week.

The stencil will remind people not to buy alcohol for under 18s, and will promote the message "Be Responsible, Be Respectful, Be Safe". 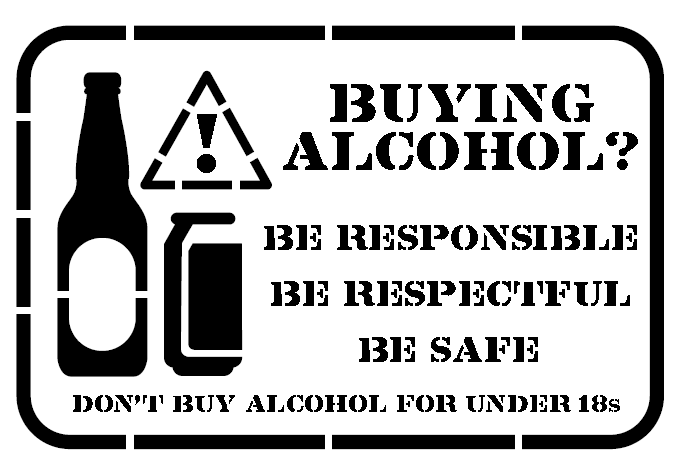 As part of alcohol awareness sessions run by the Wantage and Grove Community Alcohol Partnership (CAP) year nine students were asked to take part in a competition to design stencils that discourage underage drinking. The winning entry, designed by Jacob Creed, will be stencilled outside Sainsburys and Waitrose on Monday 10 July.

Cllr Eric Batts, Cabinet Member for Community Safety at Vale of White Horse District Council, said: “The Community Alcohol Partnership has put a lot of work in to addressing local concerns about underage drinking in Wantage and Grove - this is very much a collaborative effort from people across the local community.  The recent alcohol awareness sessions at King Alfred’s were well received by the pupils, parents and teachers.

We had a great response to the stencil competition.  Jacob Creed’s winning design will now take pride of place in key locations around the area, helping to remind people of the dangers of underage drinking.”

James Maddern, Assistant Headteacher at King Alfred’s Academy, said: “King Alfred’s Academy has been working closely with the CAP over the past year. We are committed to educating our students on the dangers of underage drinking as well as promoting the ethos of being responsible, respectable and safe. We have been delighted to welcome our partnership agencies into the school to work with the young people and will continue to support these projects.”

If members of the media wish to attend the first stencilling please confirm by calling 01235 422400 or email [email protected]  This will take place at 9.30am on Monday 10 July at the entrance to Sainsbury's.   Local CAP members will also be available to talk about the scheme.

MORE ABOUT THE WANTAGE AND GROVE CAP

CAPs, which operate throughout the UK, are partnerships between local authorities, police, schools, retailers, neighbourhood groups and health providers, to tackle alcohol-related harm to young people and improve the quality of life for residents.

Earlier this year the Wantage and Grove Community Alcohol Partnership (CAP) held two Alcohol Action Days at King Alfred’s Academy in Wantage.  Year nine students took part in various workshops including wearing 'beer goggles' to experience the disorientation of being intoxicated.  The pupils also heard from the local police about licencing laws and the potentially dangerous situations that can occur due to being drunk, as well as from 24-year old musician Henry Maybury, whose brother Tom died from an alcohol related illness at the age of 29.  Henry’s song “Lost Days” is a tribute to his brother and has achieved over a million views on YouTube.