Community Alcohol Partnerships (CAP) are excited to be expanding into new areas of the UK, with the opportunity to support local communities to reduce underage drinking and alcohol-related harm to young people.

The first CAP in Cumbria has now been launched in Barrow in Furness, and the first in Lancashire in the Bulk Ward Area of Lancaster. Both CAPs were launched in January with community partners including local authorities, retailers, police and schools.

They aim to reduce the sale of alcohol to young people, advise them on the dangers of drinking and provide alcohol-free activities through youth services and local charities. 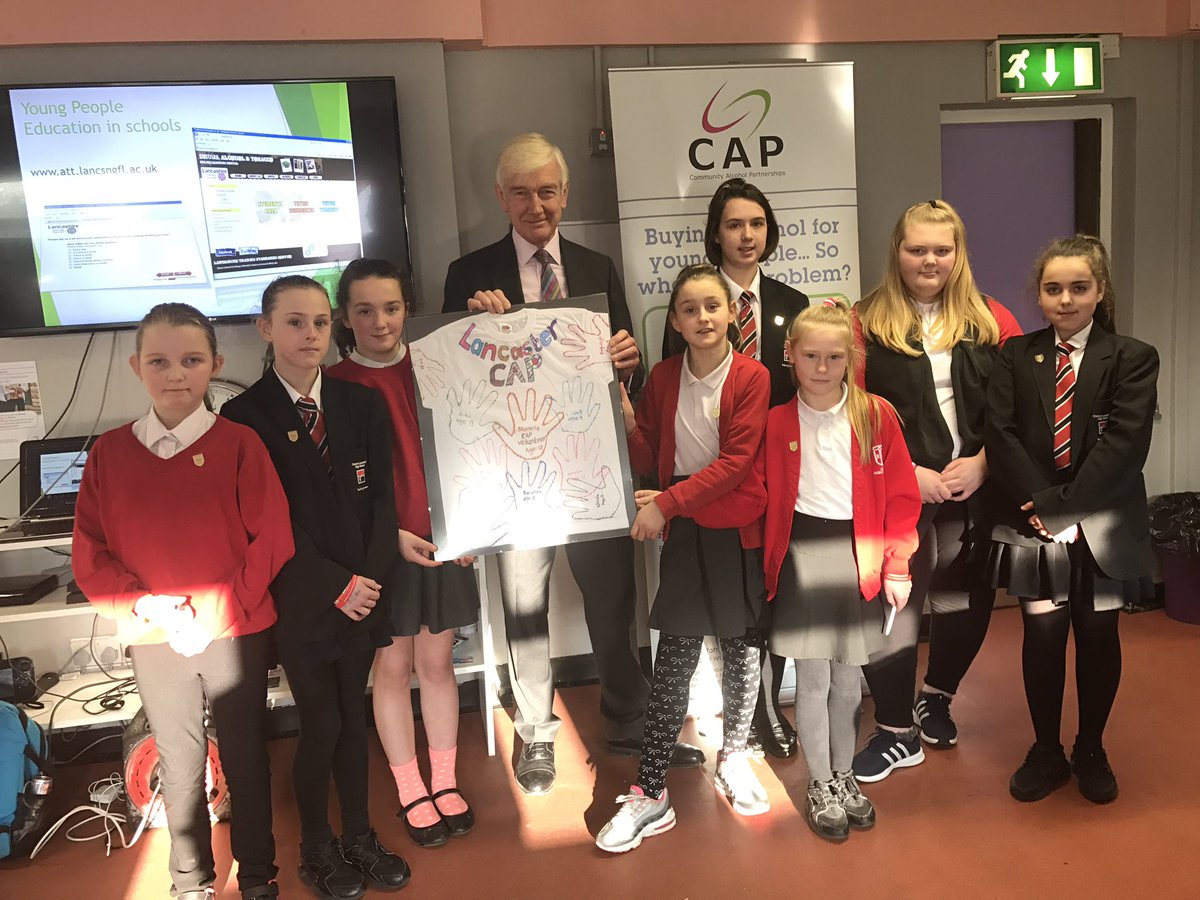 In Lancaster, young CAP ambassadors from local schools have been out surveying residents to inform the new CAP’s work and spoke at the launch about their experiences. They presented CAP chairman Derek Lewis with a T-shirt they had designed themselves, reflecting the Helping Hands theme of the day. Partners including The Ridge Community Centre, trading standards, the police, retailers and local schools all signed the Helping Hands pledge to demonstrate their support to help make the community a safer place.

Councillor Azhar Ali, County Council Cabinet Member for health and well-being said: “There is growing concern about the levels of underage drinking in Lancaster among local residents, councillors and retailers, so I am delighted to announce the introduction of the Lancaster CAP to tackle alcohol-related harm in the area. Drinking alcohol at a young age brings serious risks to children’s health and development and puts them in danger of both physical and social harm. They are far more likely to injure themselves or someone else, engage in unsafe sex, fail to reach their potential at school and engage in anti-social behaviour. We are committed to making a positive difference to their lives and to our local community.”

In Barrow-In-Furness, CAP partners are optimistic that the new CAP will make a significant difference to high rates of alcohol harm related with underage drinking in the town.

Barrow inspector Matt Pearman said: “Like many large towns, unfortunately Barrow sees cases of young people drinking too much at the weekend. As well as causing health problems and increasing hospital admissions, this can also be associated with anti-social behaviour which affects the wider community.”

A large part of CAP activity will be educational, with a workshop for licensees kicking off the partnership at the launch. There will also be talks arranged to take place in schools.

Inspector Pearman added: “It is important to educate the licensees and retailers about challenging those under 25, to limit the access that youngsters have to alcohol. However, it is also important to educate those young people in the hope we can impact them early to prevent them misusing alcohol not only while they are underage, but in later life too. Along with our partners we have a responsibility to make sure that Barrow and the surrounding area is a safe place to live and socialise, and it is hoped that the CAP will enable us to come together further to ensure this remains the case.”

Cumbria’s Police and Crime Commissioner Peter McCall said: “This is great news, and an excellent example of how we can all work together for the benefit of our communities. I fully support any initiative that will help tackle problems caused by alcohol misuse, and indeed, this is one of the objectives in my police and crime plan. Not only does this prevent crime but it will also help improve the health and lives of our young people.”

Public Health Locality Manager at Cumbria County Council, Lesley Graham, said: “Alcohol related harm is a significant problem in Barrow and in recognition of this, reduction in harm from alcohol is one of Barrow Health and Wellbeing Forum’s priorities. It is about education around responsible drinking, particularly with our young people who are just starting on their life journey, so the Community Alcohol Partnership initiative is very much welcomed in that respect.”

“Education is key, we need to improve young people’s attitude towards alcohol, restrict their opportunities to access alcohol whilst underage and signpost them to other activities available in the Borough. I fully support an initiative that strives to improve the health and well-being of young people in our Community."

Across the country CAPs have had outstanding impacts on local crime, anti-social behaviour, litter, feelings of safety and reductions in underage purchasing of alcohol. Recent evaluations (using comparative baseline and post intervention data) show reductions in harm across a wide range of outcomes: