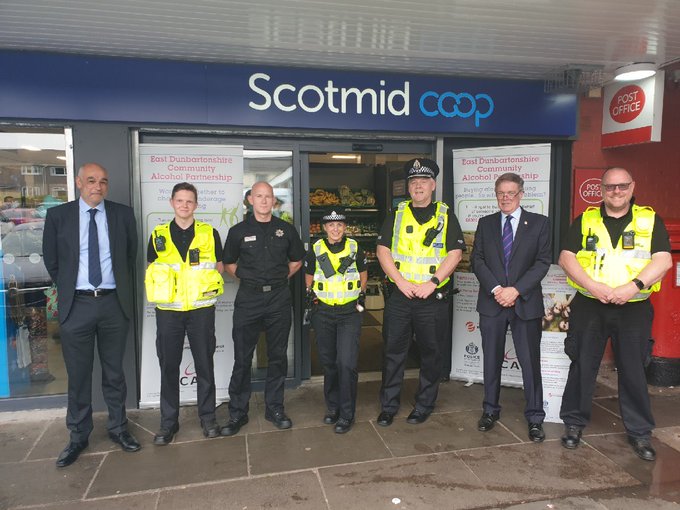 Today (Friday June 24)) sees the launch of a Community Alcohol Partnership (CAP) in East Dunbartonshire to highlight the risks of underage drinking, improve the health and wellbeing of local young people and enhance the communities where they live.

The new partnership will cover local towns and villages around Kirkintilloch, Bishopbriggs, Bearsden, Milngavie, Lennoxtown, Torrance, Milton of Campsie, and Twechar. It comes after residents voiced their concerns about young people drinking in the area:

Over 500 young people aged 13-17 took part in a further survey in which 35% said they drank alcohol at least once a week.

CAPs are made up of partnerships between local authorities, police, schools, retailers, neighbourhood groups and health providers, working together to prevent alcohol-related harm to young people and improve the quality of life for residents. More than 250 schemes have now been launched across the UK, including Edinburgh, Kilsyth and Orkney.

Partners in the East Dunbartonshire CAP include Police Scotland, council departments including education, licensing and trading standards, the community safety partnership plus local schools and retailers.

The CAP will work with youth services and local organisations to provide alcohol-free leisure and sports activities for young people. It will also work with local schools to take a proactive approach to alcohol education and ensure that young people are equipped to make the right decisions about issues including alcohol and drugs and anti-social and criminal behaviour. Working with local retailers the CAP aims to help them avoid making underage sales and to reduce ‘proxy’ sales where adults buy alcohol for under-18s.

Chief Inspector John Menzies of Police Scotland said: “I am delighted to see the community coming together in this new CAP to help young people make better choices around alcohol and reduce the harm it causes to them and the communities where they live. We are continuing to work together with key partners to get alcohol free evening activities up and running.”

Kate Winstanley, Director of Community Alcohol Partnerships, said: "I am very pleased to see the launch of a CAP in East Dunbartonshire, following on from the success of our CAPs in Edinburgh, Kilsyth and Orkney. Underage drinking is associated with school and educational problems, unprotected sex, drug-taking, violence and drinking problems in later life. In just over a decade CAP has set up more than 250 partnerships around the UK and our evaluations show they are having a significant impact on reducing children’s alcohol consumption, improving their health and wellbeing and enhancing the communities where they live.”

Since CAP was created in 2007, it has launched more than 250 schemes in England, Scotland and Wales. They bring together a range of local stakeholders with a shared interest in preventing underage drinking and encouraging responsible drinking among young adults.

A new partnership launches in Preston to tackle underage drinking