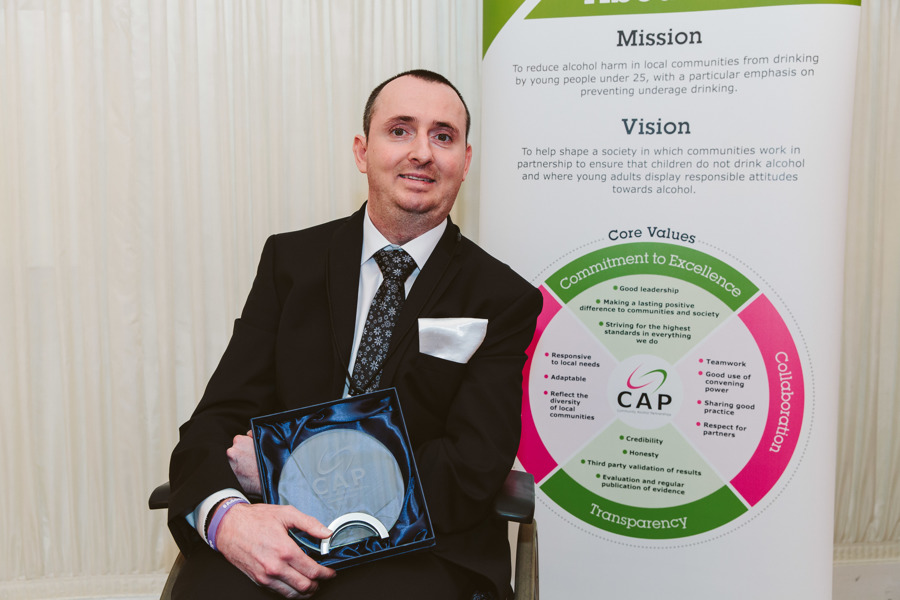 Paul Pugh of the Paul’s Pledge campaign has won a national award from Community Alcohol Partnerships (CAP) for his work tackling underage drinking. He received the  Chairman’s Award at the CAP celebration at the House of Lords on January 29.

Presenting the award, CAP Chair Derek Lewis said: ”Paul visits schools, colleges and youth clubs to raise awareness of the dangers and consequences of alcohol-fuelled violence. Paul spent two months in a coma after being assaulted in Ammanford, Carmarthenshire when he was on a quiet night out with friends. In 2014 he launched Paul’s Pledge with Dyfed-Powys Police to raise awareness and warn about the effect that such violence can have on individuals and their families. He has made presentations to more than 10,000 young people across South Wales and clearly has a huge impact. I am delighted to present this award to Paul in recognition of his courage, bravery and inspiration.”

Derek Lewis added: “Underage drinking is associated with school and educational problems, unprotected sex, consumption of illicit drugs, violence and drinking problems in later life. We have been greatly encouraged to see emerging evidence that CAPs are reducing alcohol consumption by underage children. While the proportion of young people in England who regularly consume alcohol has dropped slowly between 2001 and 2018, the reductions achieved in CAP areas are even greater, with 52% average reductions in regular drinking among 13-16 year olds. We believe that this reflects the increasing emphasis on working with schools within the CAP areas.”