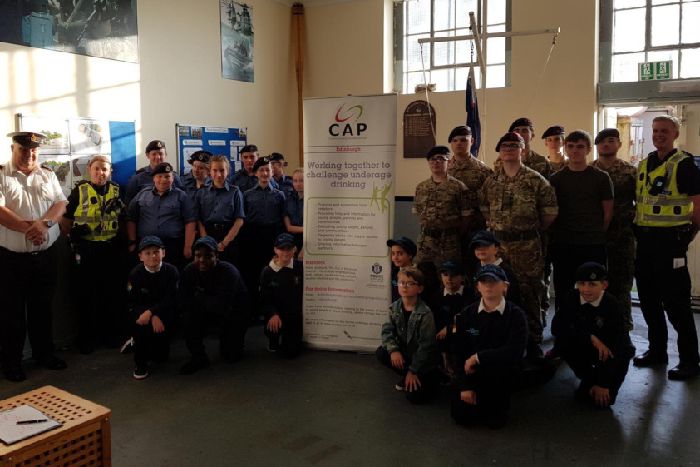 Local sea cadets in South Queensferry have this week been busy helping police spread the message about the sale of alcohol to youngsters.

A group of 20 Queensferry Sea Cadets assisted the police with a letter-drop on Monday, raising awareness of buying/ selling alcohol for/to youths.

Community police officer PC Martin Crow spoke about this part of the education aspect work police are doing with the Community Alcohol Partnerships.

He said: “This initiative is to educate young people, shop keepers and adults. It’s not a particularly big problem here. It’s just something we are doing in general to make everyone aware what to do and how it can lead to anti-social behaviour if youths get access to alcohol. There have been some instances locally, but not many.

“We work with retail premises, schools and adults as well on this message, so this is just part of that. We just want people to be aware that if they are approached to buy alcohol for anyone under 18 it is an offence to do so. And if there is sufficient evidence they could be charged.

“It’s helping the community by just saying no.

“We want to make people aware. If this letter drop helps lower instances of this crime then fantastic. If not, at least we have put that message out there. And the Sea Cadets are delighted to be involved.

“It ties in with school talks we do on this. Over the school year we go into local primary and secondary schools to talk about alcohol. It all links in together. It’s just about keeping the message out there. Obviously we will speak to the retailers as well so they know about this letter drop.”