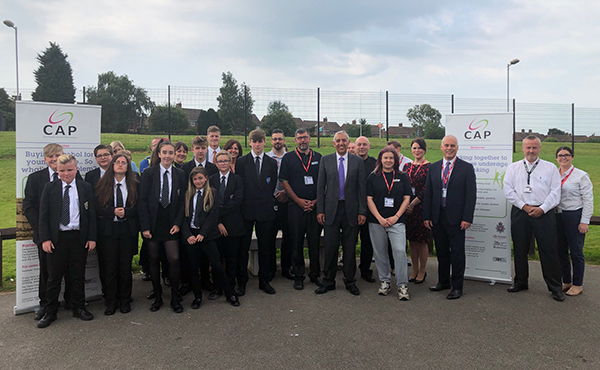 A new partnership initiative has launched in Bolsover to help target underage drinking and anti-social behaviour.

It is a new initiative our local Safer Neighbourhood policing team has set up to help reduce concerns around underage drinking and related anti-social behaviour.

The partnership places less emphasis on enforcement and more on education and support, with the aim of protecting young people and making them aware of the risks of drinking alcohol.

If youngsters drink alcohol it can make them more vulnerable to becoming a victim of crime or increase the risk of them making choices which lead to committing anti-social behaviour or crime.

Our officers continue to carry enforcement, which is community intelligence led, while local retailers commit to helping to prevent under 18s being able to obtain alcohol whether buying it themselves or getting adults to buy it for them using current initiatives such as Challenge 25.

Along with officers from our Safer Neighbourhood policing teams, the launch event included students and staff from The Bolsover School, Police and Crime Commissioner Hardyal Dhindsa, Bolsover District Council and Bolsover Community Safety Partnership, representatives from the Co-op in Bolsover and Freedom Community Project, as well as Extreme Wheels and Area 51 Martial Arts Martial Arts and Tricking Academy.

Insp. Rob Bowns, who is in charge of policing in Bolsover and North East Derbyshire, said: “Drinking alcohol while young carries serious risks to a young person’s health and development. It also can make them more vulnerable, putting them at an increased risk of being a victim of crime.

“In addition, there is a well-known link between youth disorder and underage drinking which causes concerns for our communities.

“The Community Alcohol Partnership will really build on our established links with local partner agencies and is an opportunity to come together to make a difference to our young people and the wider community, and helping to make Bolsover even safer.”

“We’ve already developed a whole new infrastructure in Derbyshire to help people tackle dependency issues whether alcohol or drug-related as well as the social problems which cause them. The model of intervention developed on the back of the City Centre Summit in Derby has been recognised nationally for its success.

“It has always been my argument that support and education are critical to the prevention of alcohol-related crime and mental health crisis in the long-term and the earlier we can start this the better. This scheme supports the proactive work we are already carrying out through the Safe Night Out campaign to ensure young people in Derbyshire are given the support and advice they need to stay safe.

“I congratulate the police in Bolsover and Alan Simpson, Community Alcohol Partnership organiser, in bringing together so many partners to tackle the problems associated with underage drinking and ASB. In particular I would like to thank The Bolsover School and the Co-Op in providing facilities and input into the activities that will be required to engage with young people under 25 to into more constructive lives.”

The Bolsover Community Alcohol Partnership is the first of its kind in Derbyshire, and the 180th scheme to launch nationally.

Alan Simpson, CAP Advisor for England (East) and Scotland, said: “A significant proportion of children have not only drunk alcohol before the age of 18  but are likely to have been drunk at least once in the last four weeks. This can be seriously damaging to their health and development and impact negatively on the wider community. CAPs offer a great opportunity to make a real and lasting difference to our nation’s relationship with alcohol, starting with the current generation of young people.”

You can follow the work our Safer Neighbourhood policing teams are doing as part of the CAP as well as other work in the area through Facebook: www.facebook.com/BolsoverClowneSNT.

We also send out free community safety alerts, crime information and messages on our Derbyshire Alert system, visit www.derbyshirealert.co.uk for more details and to sign up.

More information about CAP is available at www.communityalcoholpartnerships.co.uk.